MOBILTY TO OLSZTYN BY PORTUGUESE STUDENTS.

Here you can find our diaries telling about the our experience in Olsztyn! We hope you like it and encourge you to live an experience like this!

The first day of the journey the teacher presented the schools and Irmina created the transnational groups, with which the students were working all the trip.The first afternoon we had free time to get to know the city and the other members of the project.The next day we headed to the local food bank,where we learned cooking techniques and were given a talk about how not to waste food and another one of the benefits it would bring.When we finished the presentations we were cooking a salad and an apple with cinnamon and typical jam of the village. and this was our lunch. In the afternoon the Polish students took us on a tour of the old part of the town.Later we went to see a beautiful lake.The next day we took a bus to Gdansk, a city we all fell in love with. Once we arrived in the city, we had a guide who would take us and tell the story of the most important places. That same day we were given free time to buy souvenirs and then we went to lunch with all the members of the project.The last day that we were with the other countries we'worked at the school until half of the day and we presented the presentations done with the transnational groups. Later on, we went to take a walk by the zone of the shopping centre with the Portuguese students. At night we had dinner with all countries together to say goodbye and to get  our Erasmus certificates.

Here you can see the a video with some photo of our stay!!! 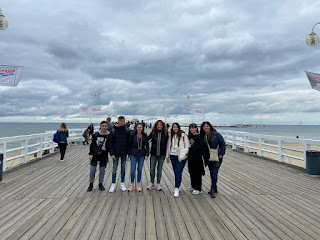 We made more friends with the Portuguese and the Slovaks. Every evening we played cards with the Portuguese students . We learnt a lot of English as we could only communicate in English .About the food waste project we learned some different ways of how not to waste food and the benefits of following the advice. We would repeat this experience a thousand times again.

https://youtu.be/Bin_MdtG08 On 12th March,2021  we had an online conference on Renewable energies given by an expert from Alaska called Kaitlin Mattos. Students and teachers from all countries involved in the project attended, 72 in total. It was a great success and we learned a lot about how we can take care of our planet.

This conference forms part of this term part of the project: "Energy Waste". It helped us to introduce the topic and now our students can learn more in depth about the topic and know more ways of how not tot waste so much energy.
at March 13, 2021 No comments:

Slovenian students are working on a new challenge. They are making new projects from clothes they don't wear anymore.

Here is our students first video.